About The Author of The Truest Heart – Jayne Sbarboro 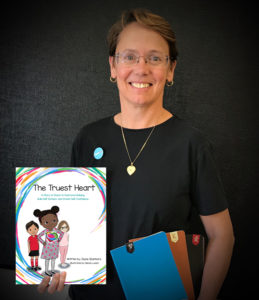 Jayne is a writer who lives and works in Denver, Colorado. She was a classroom teacher for sixteen years, a principal for six, as well as a reading interventionist. She was a recipient of a Denver Teacher’s Award, and was selected to be an American Council of Learned Societies Teacher Fellow developing a multicultural curriculum spanning five schools. Advocacy in the Public School Classroom: Problems and Possibilities was her first academic publication.

Her first children’s book is The Truest Heart: A Story to Share to Overcome Bullying, Build Self-Esteem, and Create Self-Confidence, focusing on self-esteem and bullying. Her second book is Miss Work’s Truest Heart Companion. She works with students in classroom presentations and is frequently recommending the latest teacher resources and books at The Bookies Bookstore where she works part-time for fun.

ABOUT THE BOOK
Jayne Sbarboro wrote The Truest Heart because, as a principal in an elementary school, she saw students in her office in tears. She wanted to comfort these students, and moreover, give them a shield for their wounded heart so that they could protect themselves other bullying situations. That heart shield became the “Truest Heart,” and the process she used with students is the process Miss Work uses with Ze to help her overcome bullying.

ABOUT BULLYING
Jayne often worked with children who had bullying behavior, and gave them consequences for their behavior.  She noticed that where one behavior was addressed, a different one popped up.
It was the target of the bullying behavior, in tears in her office, that needed protection.

More than anything, these students needed to know how to protect themselves emotionally from the arrows of bullying–because bullying is done out of sight or earshot of adults (who would protect them if they could).  Sometimes the parents of the target would come, in anger, and say, “I tell my son, just hit them back!” After watching this cycle play out time and again, Jayne wanted to tell them (gently) if their child got into a fight …and if their child did win,

the only thing they would really ‘win’ was that  someone would want to get them back.  So their kids would then have to be even more vigilant –because they wouldn’t know if it would retaliate with an older brother or a cousin, or even a weapon.  Hitting back never worked out like the parent envisioned.

THE FIRST PAPER HEART
As a child sat in tears, Jayne would start to try to cheer them up by thinking of all the things that were going right in their life. She would ask them about people she already knew loved them, about things she already knew they were good at, and try to help them think of their uniquely great qualities. She’d draw them on a paper heart because it gave the student something to watch and distract from their tears. And students always wanted those paper hearts. It gave them something tangible to hold. And they would look at it as though they could not believe their own strength.

THE BRAVEST HEARTS: EMPOWERING OUR FRIENDS

Published in 2019, this story came about because of an experience as an adult, paired with experience with Olweus Bullyproofing program from Norway.  That is a story best left for another time.