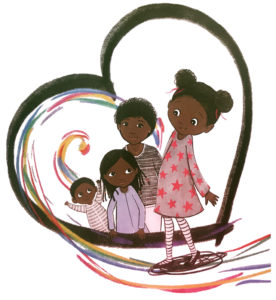 Using the Truest Hearts of Your Students… in Your Classroom and in School.  Empower children to be THE BRAVEST HEARTS!

Olweus Bullying Prevention Program has had high success rates in reducing bullying in schools.  It is based on empowering the bystanders. Schools and Student Councils can create “Truest Heart Teams”.  These teams are shaped by teachers following the presentation.

In a bullying situation, there is a Target of bullying behavior. (We purposely do not call them ‘victims’ because we want to avoid that mindset).  The Target often perceives bystanders to be part of the child with Bullying behavior’s ‘crowd.’

PLEASE NOT!!  We say, “a child with bullying behavior.”  When we label someone, we put them in a little box that is hard to get out of…and while we want to change the bullying behavior, we never want to label a kid.

Those children who are nearest the incident, who hear what is being said, they are the Audience of the incident.  They do not know yet whether they are an Ally, or an Adversary. 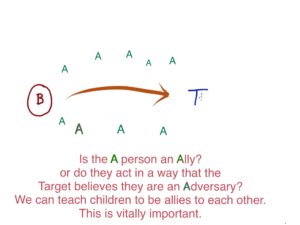 Research shows that bystanders most often are not really neutral – most often they are quite disapproving – of the Bullying behavior.  They are watching and trying to decide what to do.  Fear of the bully can lead them to want to appear on the side of the child with bullying behavior. They really aren’t on that side, they just don’t know what to do.  So we teach them.  This is the genesis of The Bravest Hearts.

With training and practice they can be empowered to stand together, to become Allies.

If the Audience, as Allies, can show kindness to the Target of bullying, then the the bullying behavior loses its audience and its power.  On the diagram you can see that a Target might feel isolated,  but they in reality could easily outnumber the Bullying behaviors.  The bystanders are trained to become Allies, and not remain neutral. This is the strongest pro-social stance we can give our children.  We want them to throw their attention and support towards the child who has been targeted.  In this way, they do not confront the bullying behavior.  Confrontation would only reinforce behavior and possibly draw the bullying behavior on themselves.  We want to reinforce the power of children for positive action.

Students who have developed their own personal power by knowing that they are strong and resilient are better able to be part of a pro-social team. We suggest using a Kagan Cooperative Learning structures such as “4 Corners” to have students self-identify as a Bully proofing team. Bravehearts, Kind Kids, etc.

Bullying affects everyone at school, because it affects the entire school climate. Your child might not be directly involved in bullying but still might be afraid of certain students or areas of the school where bullying takes place. Your child is probably very aware of bullying problems or has seen bullying happen. In that case, he or she is involved either by supporting the bullying or by not supporting it, either by taking action to stop it or by doing nothing about it.

Children with courage CAN and WILL make a difference to the whole school culture.